Posted by Connie Ramsey Venturin at 11:39 AM 0 comments

Our Next Regular Meeting is Thursday October 24th

The Black Gold Optimist Club of Leduc meets again on Thursday October 24, 2013 in the back section of Smitty's Restaurant Leduc starting at 7:30pm. Those wanting to personally order food and eat before it starts should arrive between 6:30 - 7:00pm, or earlier. Please attend as every meeting has importance. Guests and potential new members are always most WELCOME!
Posted by Connie Ramsey Venturin at 4:11 PM 0 comments

The First Quarter District Meeting was Quite Successful

Over 100 representatives from the Optimist Clubs in District 13 (Alberta, Montana, Saskatchewan, & Northern Wyoming) attended the First Quarter Meeting held in Edmonton on October 18 & 19 hosted by the Edmonton Dinner Optimist Club with assistance from the other five Clubs in the Capital Region Zone. It was well planned and ran efficiently with instructional and motivational events and sessions; resulting in enjoyment for all present. Congratulations to all involved - especially Peggy and Keivin as Coordinators.
Posted by Connie Ramsey Venturin at 4:00 PM 0 comments

Governor Glen Kreller is currently working on building a new club in the community of Beaumont just East of Leduc. Currently about a half dozen potential new Optimist have expressed an interest in this new group so we are anxious in chartering the new club. People may contact Glen at 780-916-8687 or gkreller@shaw.ca or Ray at 780-756-0493 or reventurin@shaw.ca for information about our next meeting. Also anyone with contacts for potential Charter members in Beaumont may contact us.
Posted by Leduc Black Gold Optimists at 12:55 PM 0 comments

Our environment is a little cleaner after five Leduc Optimist Club members (Margaretha, Barbara, Ian, Connie, Ray) and eight Edmonton Dinner Optimist Club members (Ruby, John, Keivin, Brian, Maria, Doug, Mike, Terry) picked up fifteen bags of trash and one of recyclables along a designated portion of Hwy. #2 south of Leduc on Saturday morning October 12, 2013. Fortunately, it was decent weather and the whole group met afterwards at Leduc Boston Pizza for lunch graciously covered by the Edmonton Dinner Club. Many Thanks to all involved.
Posted by Connie Ramsey Venturin at 1:24 PM 0 comments

The regular meeting of the Black Gold Optimist Club of Leduc on Thursday Oct. 10, 2103 heralded the start on the new Optimist year 2013-2014 with eleven members in attendance. New Vice-President Ian Rodger was recognized and thanks were expressed to Denise Stamp as outgoing VP for her work in that position.

A formal motion was put forth, seconded and approved to hold our third annual Grade 5 only Spelling Bee on April 26th, 2014.

A Thank You note from the Leduc Food Bank for our recent donation was received and read out to the club.

The application for the Alberta Gaming Raffle Licence to conduct our next fundraiser will be completed and forwarded when more information is available on costs etc.

One of the table centerpieces, looking great, was on hand to show all Club members.

Reminders were again given of the clean-up of a portion of Highway #2 roadside on Sat. Oct. 12th and the District #13 Optimist Clubs Meeting on Oct. 18 & 19, 2013 at the Quality Inn West Harvest 17803 Stony Plain Road Edmonton.

AWARDS
The President's Awards for special recognition of some club members for their efforts during the 2012-2013 Optimist year were presented: 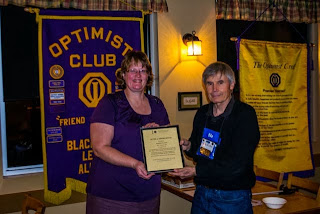 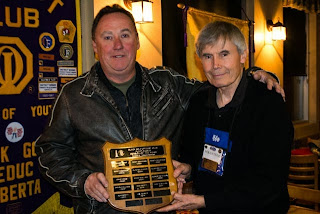 Fundraiser of the Year to Ian Rodger 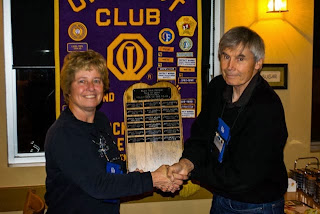 Volunteer of the Year to Denise Stamp 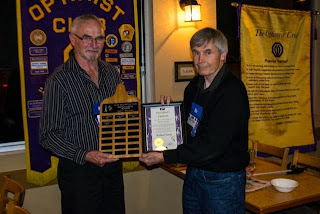 Outstanding Member and a President's Citation to Robert (Bob) Scott
And appreciation was expressed to ALL the Club members from the President for their contributions.﻿
﻿
Posted by Connie Ramsey Venturin at 12:59 PM 0 comments

Some members of the Leduc Optimist Club gathered at Bob and Donna Scott's on Sunday October 6, 2013 and enjoyed putting together 12 table centerpieces for the District 13 Optimist Clubs Meeting being held Oct. 18 & 19, 2013 in Edmonton; hosted by the Edmonton Dinner Optimist Club with assistance from the other regional Optimist Clubs. About 100 representatives from the 57 District Clubs are expected.

The guys helped with some minor prep work, and the ladies (Donna, Margaretha, Denise, Barb, Connie) used their creative instincts and dexterity to make it happen in beautiful fashion. A great job by everyone!! 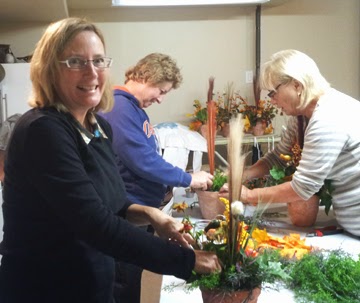 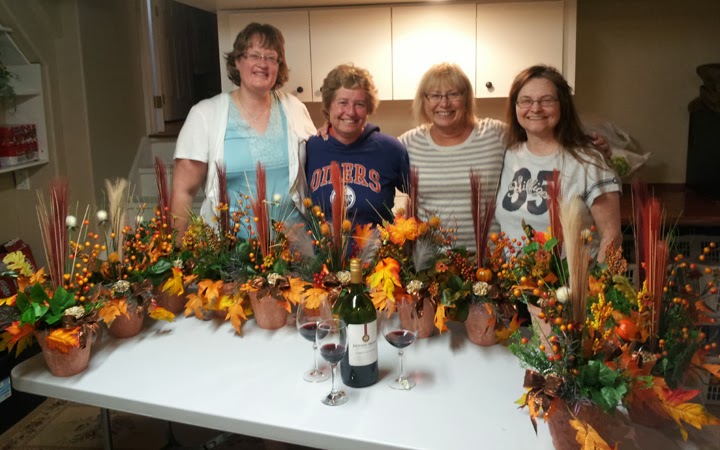 Posted by Connie Ramsey Venturin at 4:32 AM 1 comments

The next Regular Meeting of Black Gold Club is October 10, 2013. Those wanting to order food/dinner should arrive between 18:30 - 19:00 with the actual meeting to start at 19:30. President Ray will be presenting the last years year end awards. We will be reviewing our Spelling Bee project presentation. Guests and potential new members are most welcome.
Posted by Leduc Black Gold Optimists at 12:23 PM 0 comments