At the November 14, 2013 meeting of the Black Gold Optimist Club of Leduc, the two newest members were officially presented with their Certificates of Membership. Connie Venturin joined in July (during our summer break) and Donna Scott joined in October.

With new Zone 5 Optimist Clubs Lieutenant Governor Patti Welling in attendance for a visit, we were pleased to have her present the Certificates as a special touch. 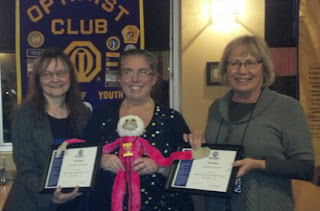 Connie on the left, and Donna on the right, receive the framed documents.
The monkey figure being held by Patti is part of a District wide campaign focusing on adding new members and Clubs with the amusing slogan: "Getting the monkey off our backs."﻿
﻿
Posted by Connie Ramsey Venturin at 11:30 AM