The September 27, 2012 meeting was attended by Keivin, Trevor, Margaretha and Ray plus guests: John and Ruby Anderson and Geoff Connor ( incoming Zone 5 Lieutenant Governor). Our club's Annual Club Planning Conference Report (ACPC) was gone over, completed and handed to our new L/G Geoff.
A Letter of Thanks was read out from the Leduc Food Bank for our donations of school supplies, food and cash brought to them on September 17, 2012.
Another was received from the Stollery Foundation for our past contributions and an appeal for further support if we are able.
The fall highway #2 roadside clean up project conducted by the Edmonton Dinner Optimist Club and assisted by the Leduc Club members is scheduled for Saturday, October 06, 2012. Please arrive in front of Boston Pizza in Leduc before 9:00 AM which is the time that we depart to the section that is to be cleaned. Please advise Ray if you are able to attend, so we can have a number to work with.
Dress should be appropriate for the task and weather. Thanks.

DONATION to LEDUC LEGION at the meeting:
Mabel Armour from the Royal Canadian Legion Leduc Branch 108 was on hand to be formally presented with the LED lighted OPEN sign which we have purchased and donated to the organization hoping to increase traffic through the facility and assist with the worthy endeavours of the Legion. Verbal and written thanks were given to our club. 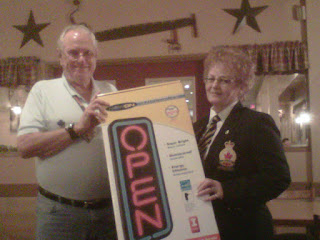